Connecting to OpenVPN on Linux and Windows

In fact the worst thing with upgrading your operating system is that there are always some features that you miss in the new one or it is broken by mistake ! I was using Ubuntu version 8.10 and when I upgraded to version 9.04, realized that intel driver that is included in this release is in beta stages and the performance was really poor. Then I downgrade to 8.10 and again with the release of 9.10 (karmic) my vpn and openvpn configuration using Network Manager did not work.

I decided to stick with Shell again, and connect using my OpenVPN configurations by a simple openvpn command.

It is as simple as running a single command, you should first switch the directory to where your config files exist and type :

Two weeks ago I had upgraded my Windows XP SP3 to Windows 7 and guess what, The openvpn-gui package wasn’t working either.

Taking a look at openvpn log, I found that it has routing problems with the following error and can’t set the routes, so the windows network applet says “No internet access” for that.

ROUTE: route addition failed using CreateIpForwardEntry: One or more arguments are not correct.

It seems that some forwarding structure and API has been changed since Vista and openvpn version 2.0.9 is not aware of them. After googling around, I found that the latest official OpenVPN release had fixed these issues. And it is interesting that they’ve included the GUI for windows in the official release. You can download version 2.1.1 from :

and take care, you should put it into “Windows Vista” compatibility mode and run it as administrator. 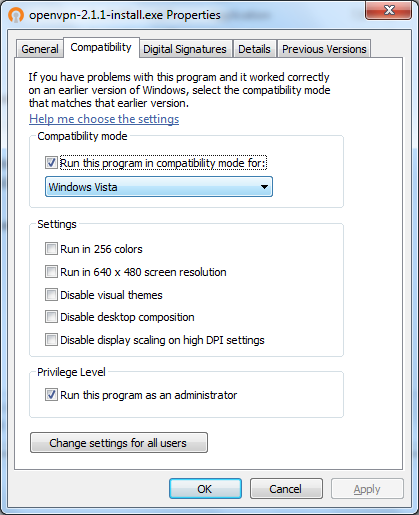 After installation, you should copy your config files into C:\Program Files\OpenVPN\config\ and run OpenVPN GUI from start menu. If you got into routing problems again, try running the OpenVPN GUI as administrator too.

This entry was posted in Believe Me and tagged Linux, OpenVPN, RootShell, Windows. Bookmark the permalink.